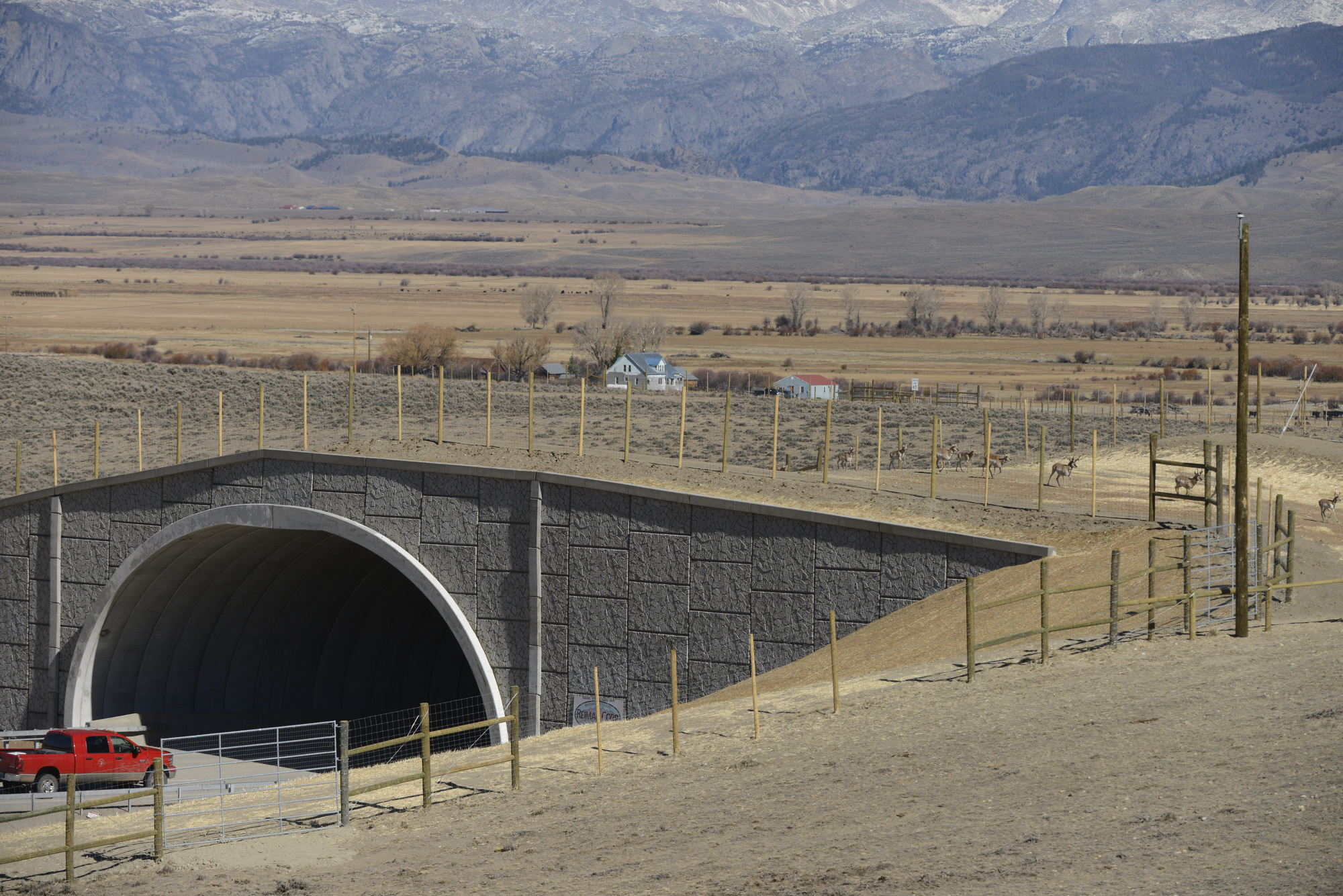 The pronghorn antelope that migrate 170 miles from Grand Teton National Park south to their winter range face plenty of obstacles: rivers, fences, a high mountain pass, subdivisions, energy development. The most dangerous place in the migration corridor is the geographic bottleneck known as Trappers’ Point six miles west of Pinedale, Wyoming. Here, two rivers swoop toward one another and then apart, outlining a mile-wide strip of land the shape of an hourglass. A subdivision blocks half the bottleneck, and Highway 191, the main roadway connecting I-80 to Jackson Hole, runs across its middle flanked on both sides by barbed wire fences.

Editor’s note: Today we’re pleased to share a follow-up story to our Freedom to Roam campaign. Patagonia’s Rick Ridgeway first teamed up with Joe Riis four years ago to document migrating proghorn and the man-made obstacles they faced.

One October day in 2008 Joe Riis, a National Geographic Young Explorers Grantee, photographed some 700 pronghorn crossing the highway at Trappers’ Point. He was part way into a two-year-long project to document the entire migration in photographs. The animals packed a trail in the snow as they ducked under one barbed-wire fence. They sprinted between cars and trucks on the highway. A dog from the subdivision chased them as they tried to find an opening under the second fence. In a panic, they continued south.

Drive past Trappers’ Point in the spring or fall, and you’re likely to see a broken-backed pronghorn carcass in the right-of-way. Mule deer, who more readily leap over the barbed wire fences on either side of the road, are even more vulnerable, their bodies strewn along a 12-mile section of highway from here west and north. An average of 140 animals a year meet their end on this stretch of road. 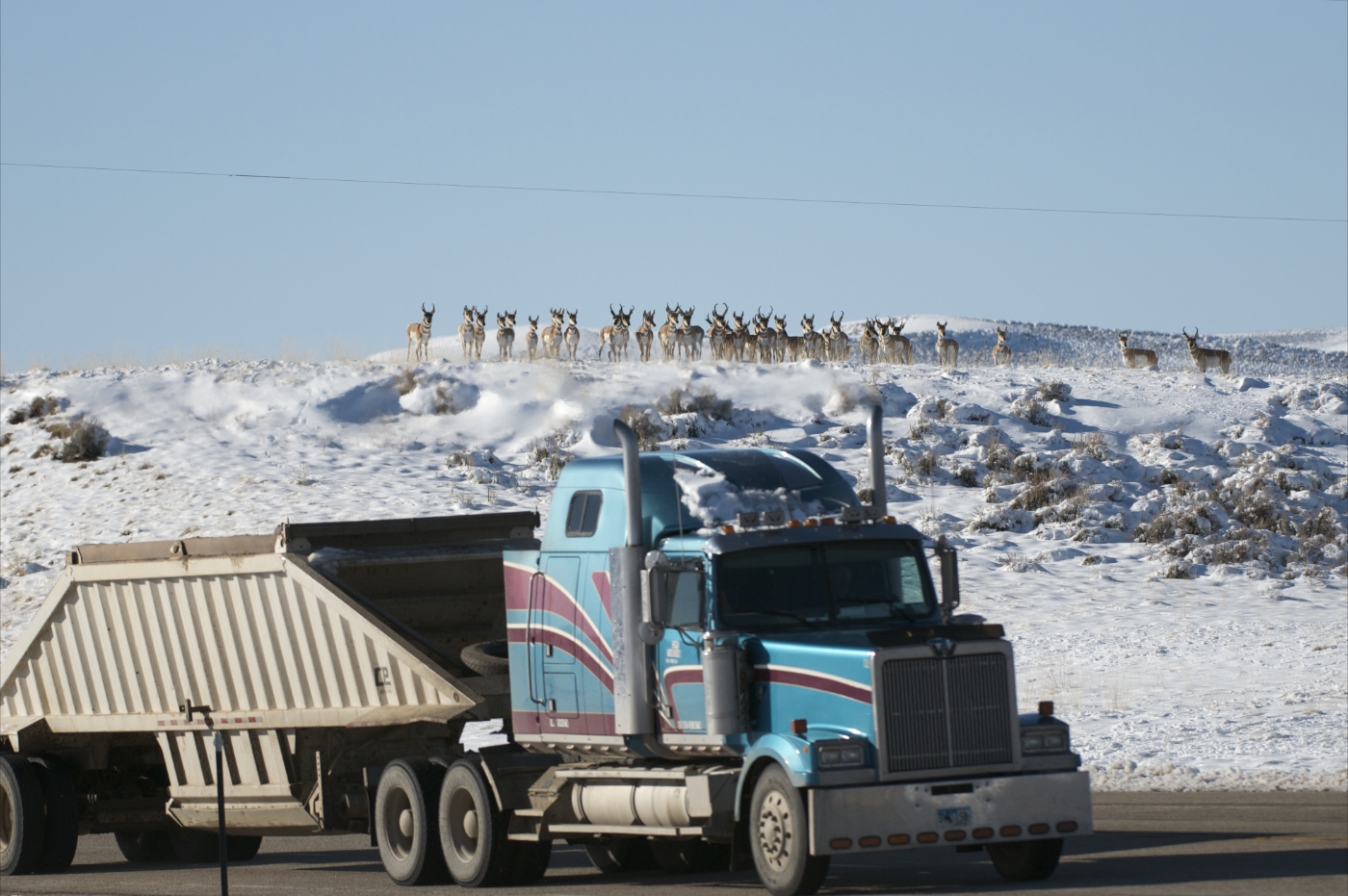 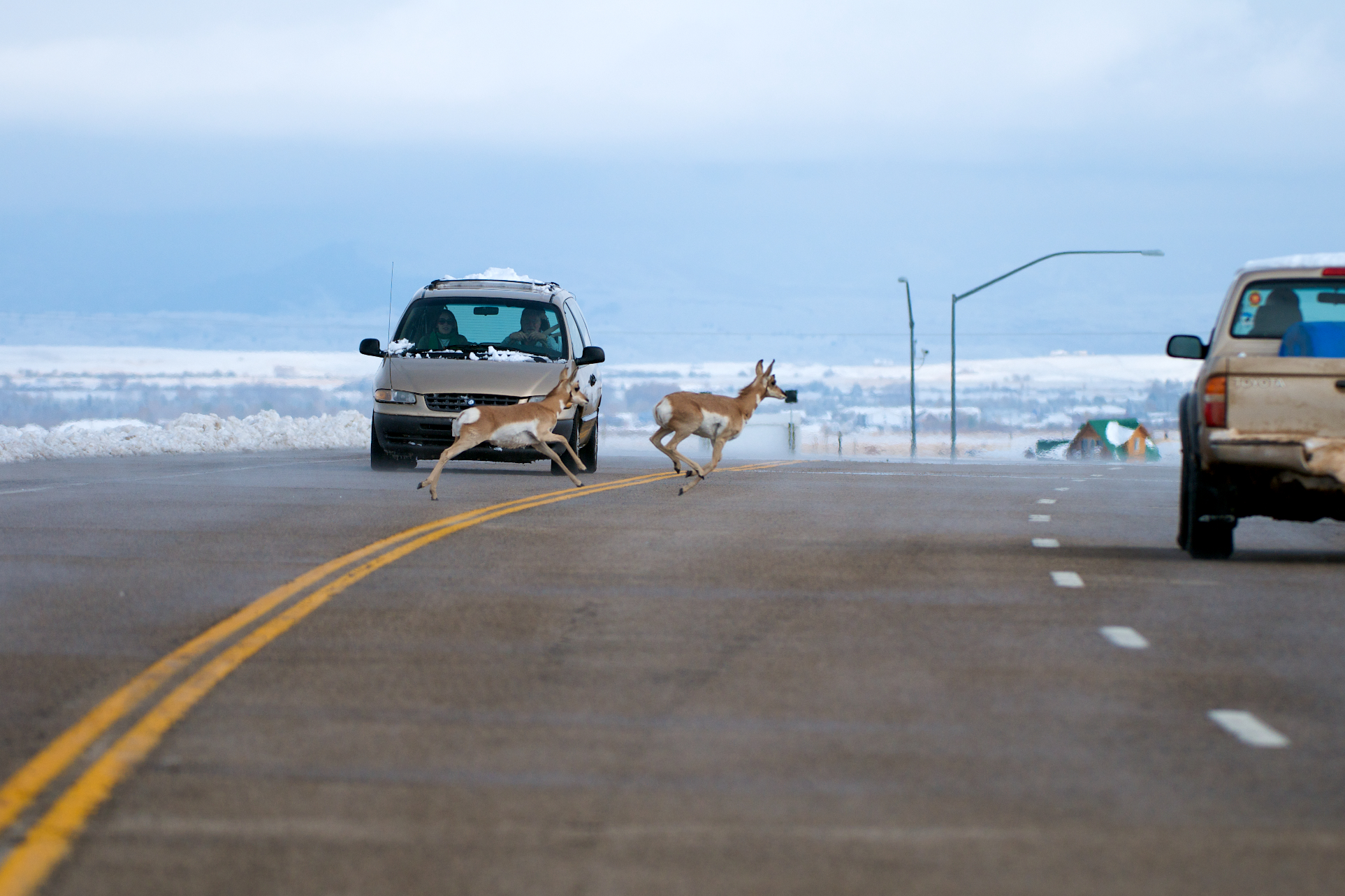 Or that’s how it used to be. Not this year. This fall the thousands of migrating mule deer and antelope that pass seasonally through Trappers’ Point encountered, for the first time, a wildlife overpass, a wide bridge with a tunnel underneath for cars to drive through.

Where the barbed wire fence used to stand, the antelope came up to an eight-foot-tall game fence. Joe, who returned this year to photograph the overpass, describes them stopping at the fence, sometimes bedding down. He watched the bucks run along the fence searching for a way through until they found the opening to the overpass. They led the rest of the group tentatively up the steep ramp on the north side. 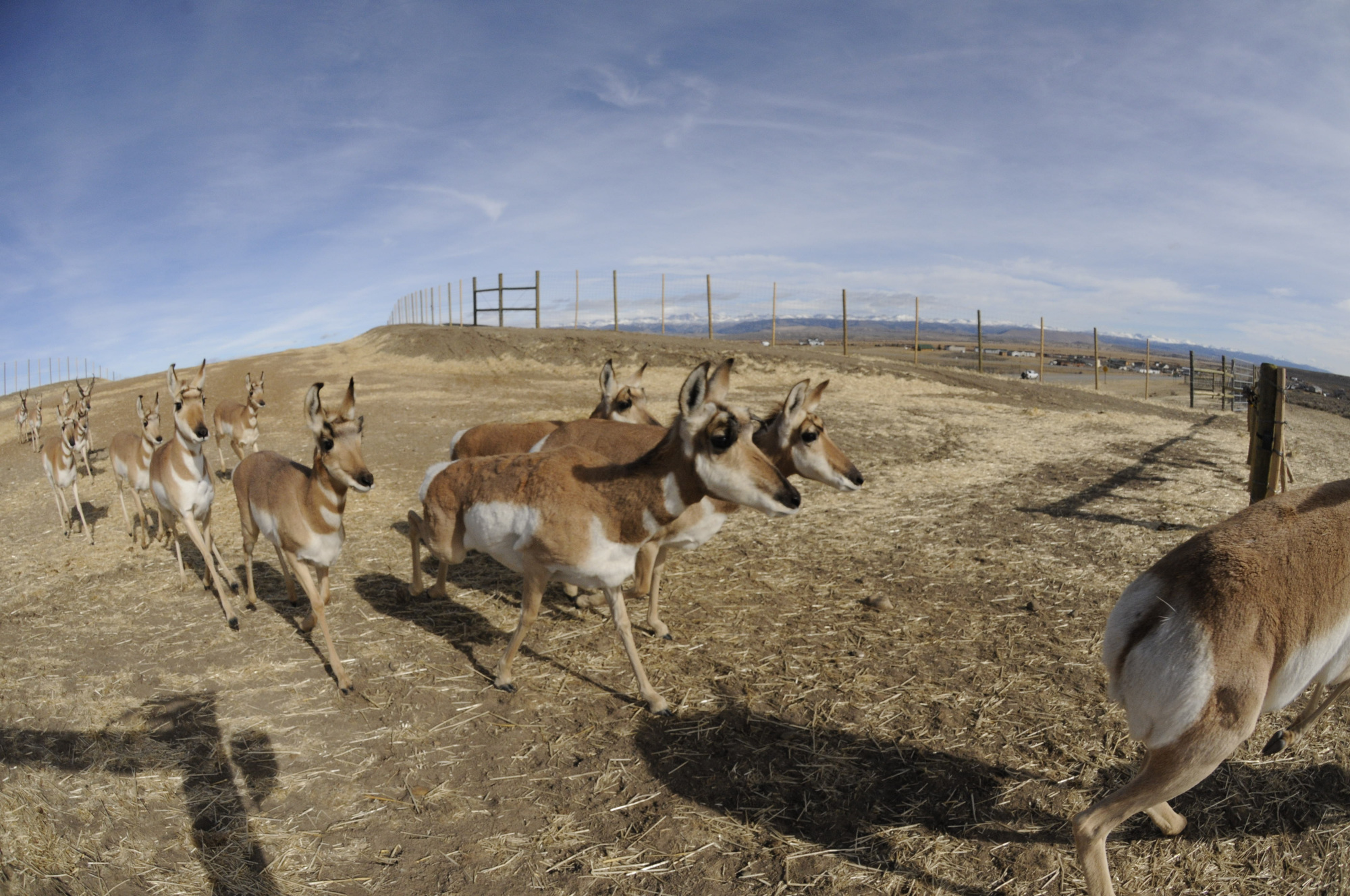 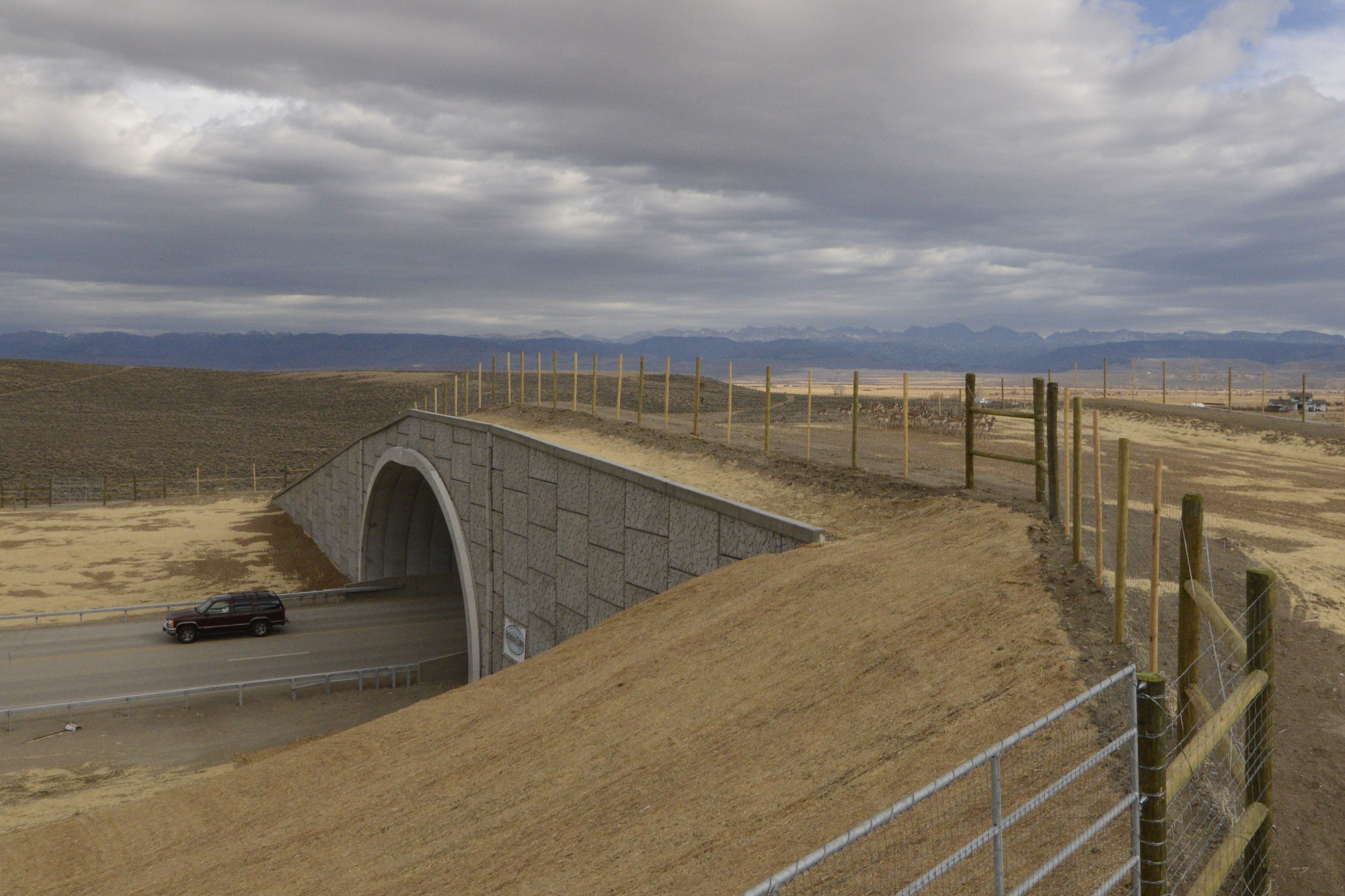 The hero of this project is an unlikely one. The Wyoming Department of Transportation, after failing to get federal funding for the project, wrote the $9.7 million check for the Trappers’ Point overpass, as well as another overpass, six wildlife underpasses, and fencing on both sides of this 12-mile stretch of highway. The savings to the state and drivers from avoiding vehicle damage while saving the lives of deer, antelope and other species will pay for the project in a dozen years.

But it took more than just numbers to get this project approved. WyDOT needed to know the rest of the migration corridor was adequately protected. They wanted to ensure that if they built the structures, animals would continue to use them over coming years.

“We’re sitting really well right now,” says Scott Smith, a state Wildlife Management Coordinator. He tallies the protections for western Wyoming’s pronghorn migration: the Bureau of Land Management made Trappers’ Point an Area of Critical Environmental Concern putting it off limits to gas drilling and other development. Biologists used wildlife collars to map the corridor and pinpoint road crossings. The Forest Service designated the first national migration corridor over the northernmost 45 miles of the route. Local land trusts replaced fences with new ones friendlier to antelope and put ranchlands along the Green River into conservation easements to keep them as pastures rather than subdivisions. And now the overpasses. “There are a lot of pieces in the puzzle that have come together over the last 10 years. I think it’s a pretty neat story.”

WyDOT also needed to be convinced this was a project the citizens wanted. Over the last half decade, this long-distance antelope migration has become one of the most treasured wildlife stories in Wyoming, thanks in large part to the photographs Joe captured of the migration and showed to thousands of people around the state and elsewhere. His pictures of antelope running through traffic from that October day are some of his most compelling.

“The last time I was at Trappers’ Point I was watching antelope cross the highway,” he says. “Now I show up four years later and they are going over a bridge.” 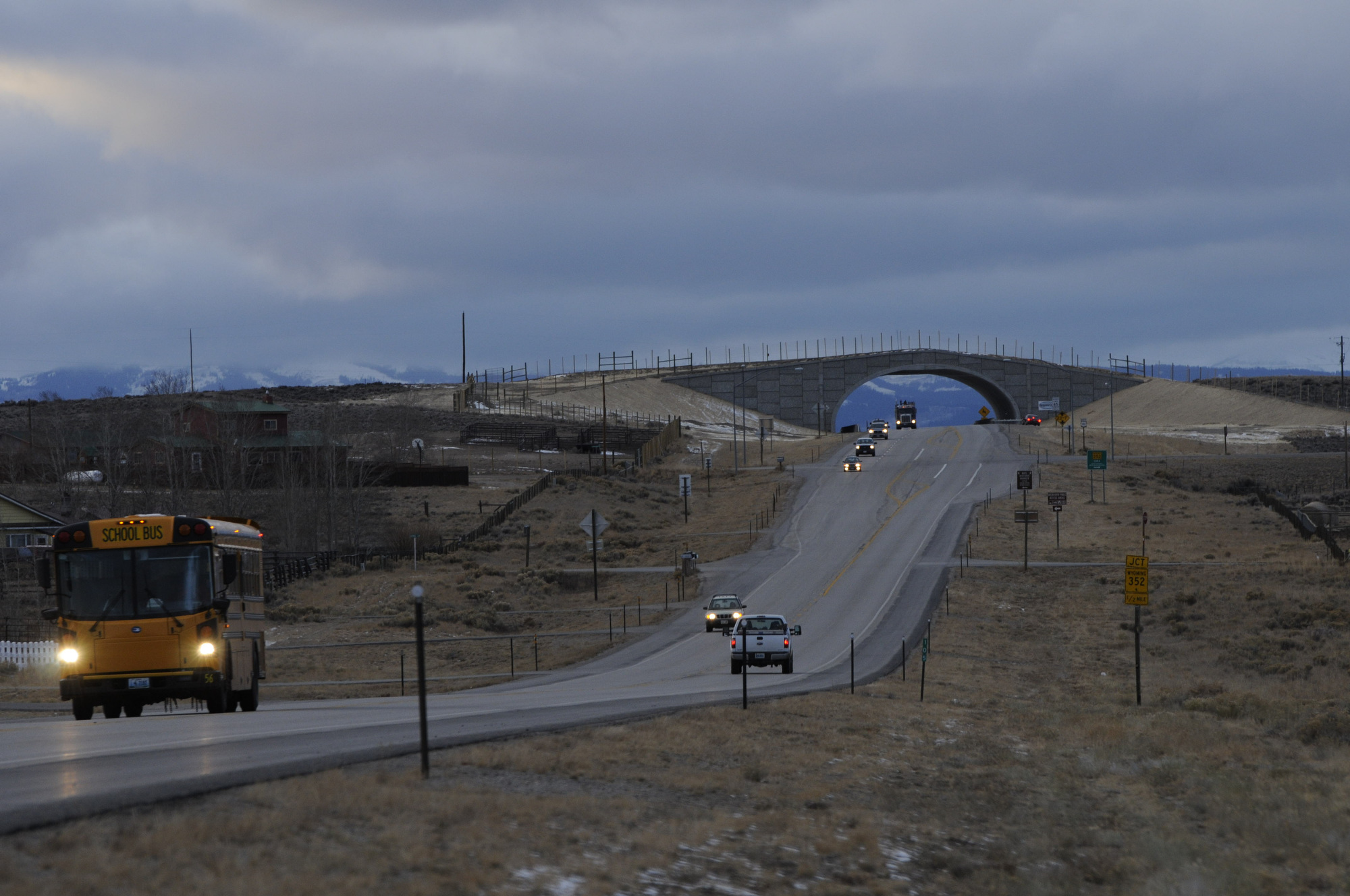 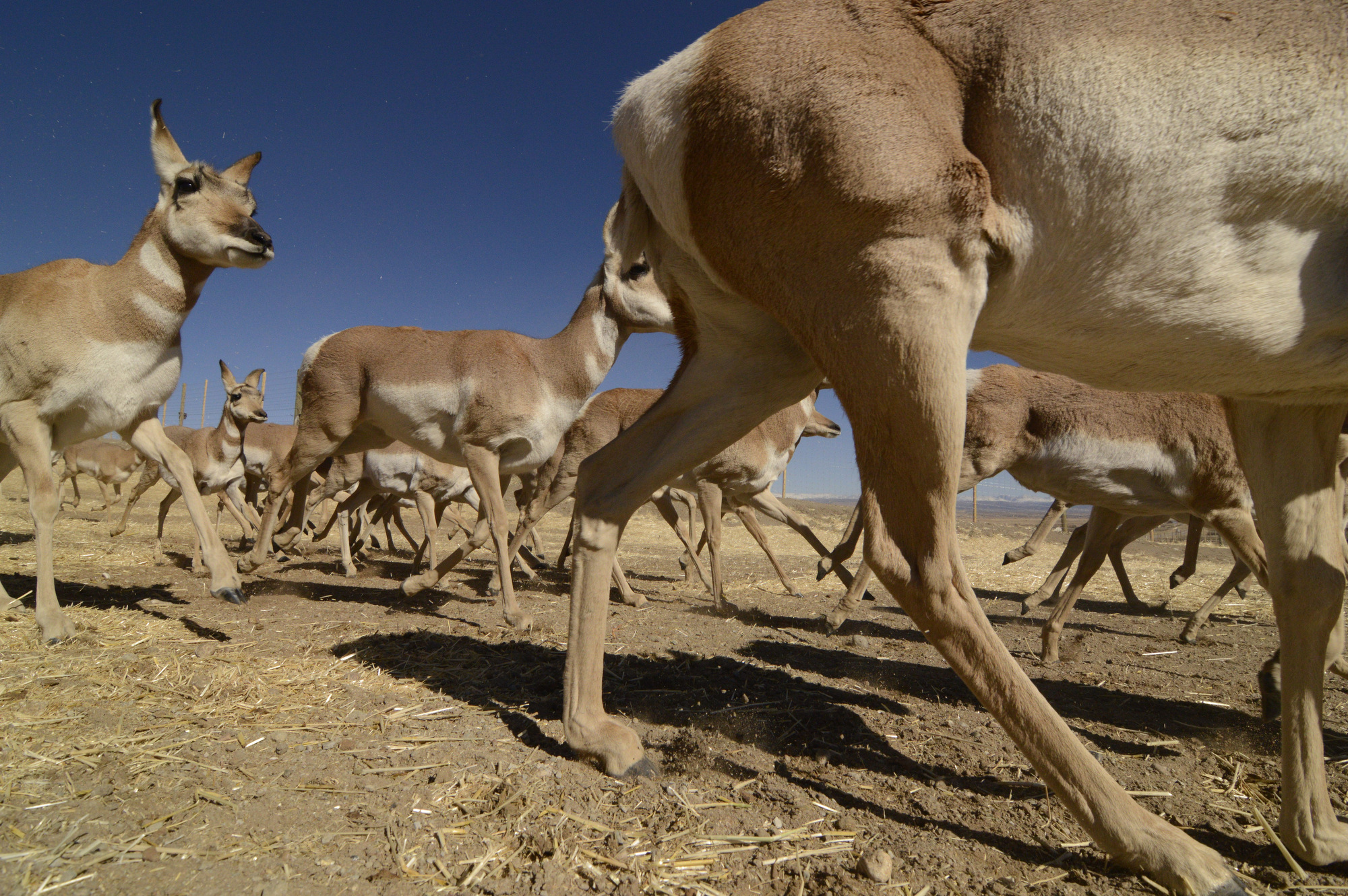 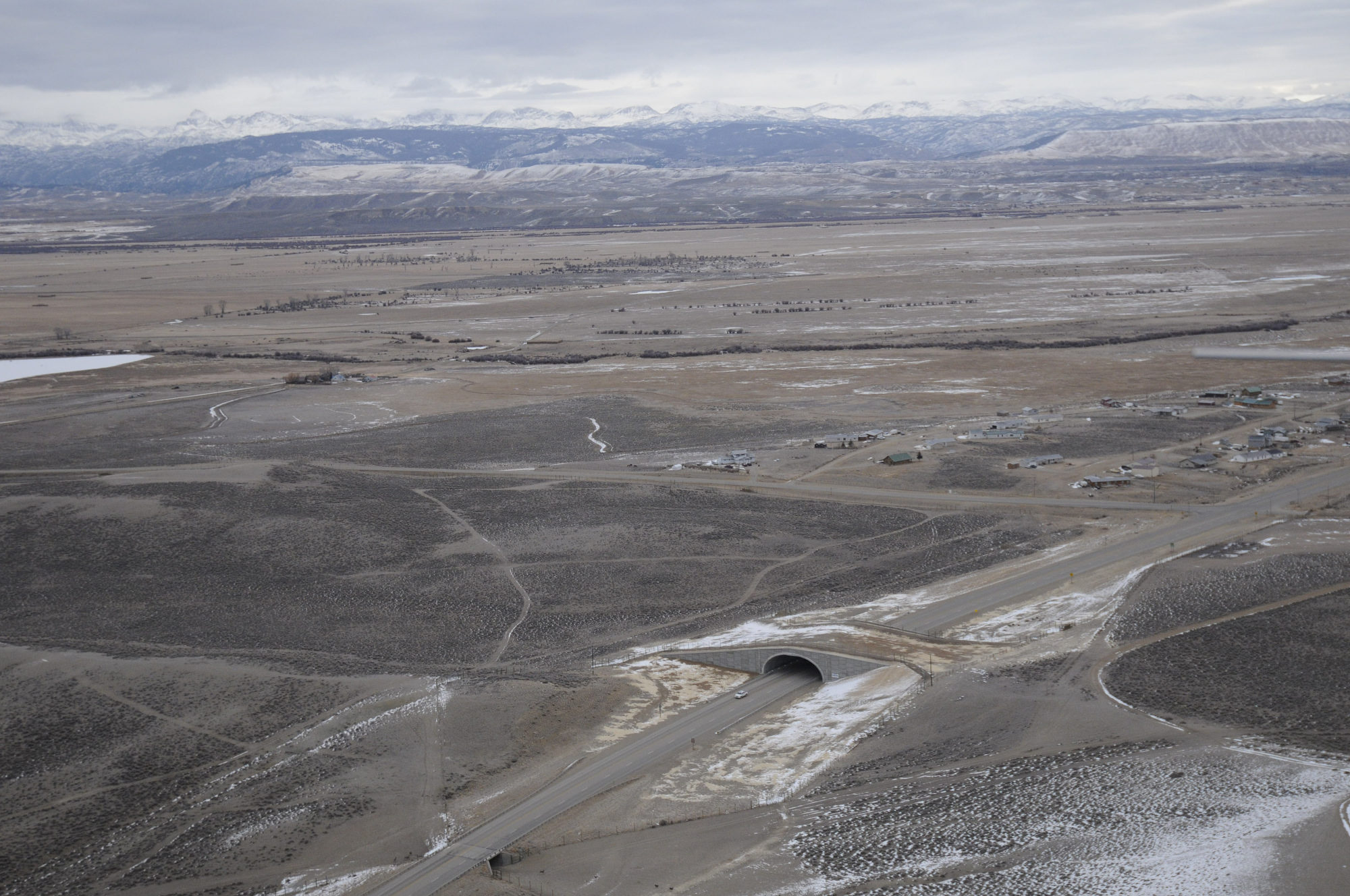 Eight-foot-tall earth berms topped by fencing line either side of the bridge. The antelope can’t see the highway or the traffic rushing by underneath. When they reach the crest of the overpass, they see over the south side, across the hills toward the Mesa and the edge of their winter range. They break into a run, streaming shoulder to shoulder down the bridge and out through the sagebrush.

“This year is the most difficult because none of them have seen it before,” says Joe of the overpass. “Next spring they’ll remember it. Next fall they won’t even think twice, they’ll just move right over.”

He hopes humans will learn from this project as well. Aerial photos and close ups of the animals on the overpass might help people understand the importance to wildlife of this project. “I’m just trying to show it functioning so other people working on these types of issues can think about their own projects where they live,” Joe says. “These highway projects are just starting to get ramped up. In the future they will be commonplace.” 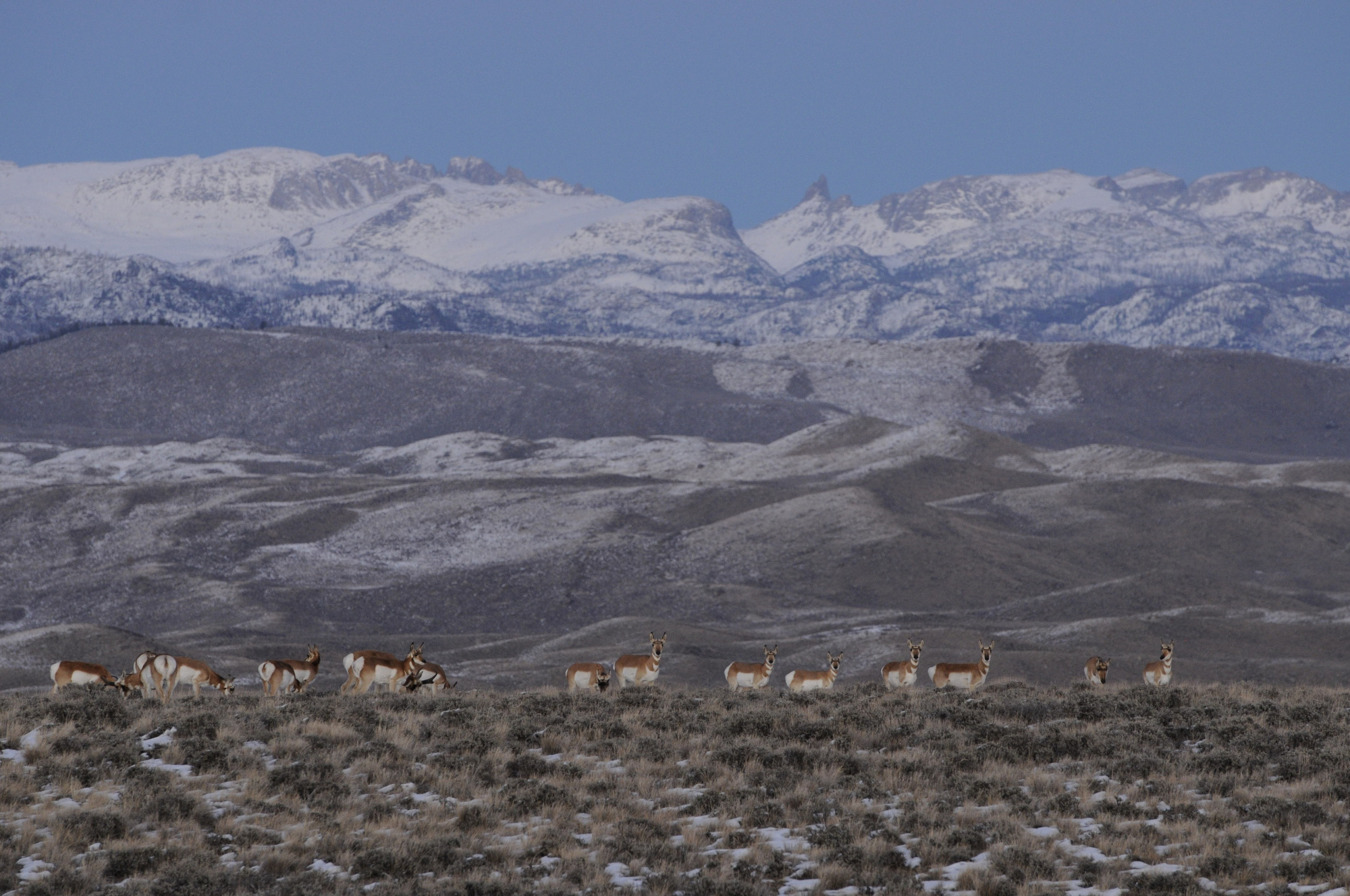 Emilene Ostlind and Joe Riis spent two years exploring the migration corridor to document it in stories and photographs. “Perilous Passages,” their High Country News cover story on the migration, received the National Association of Science Writers’ 2012 Science in Society award and the 2012 Knight-Risser Prize for environmental journalism in the West. Find the story on Emilene’s website and see more photographs at joeriis.com.