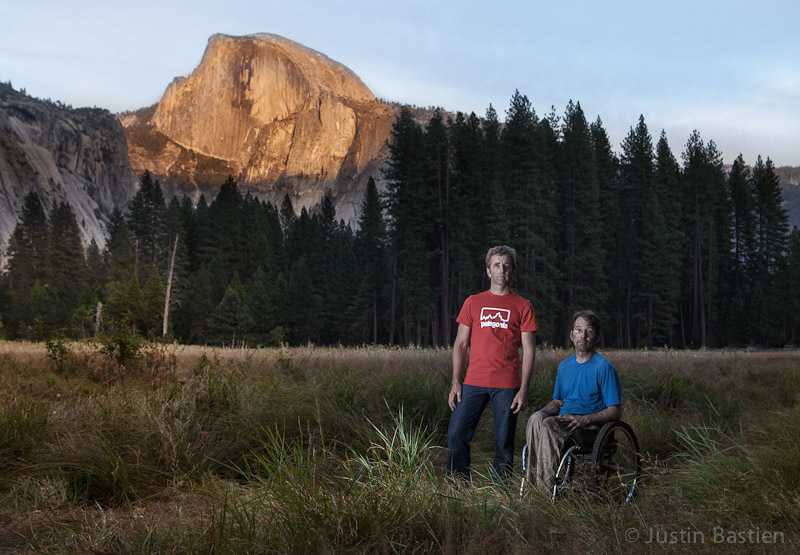 Nothing imagined, nothing created, nothing ventured, nothing gained. These thoughts come to mind as I am painstakingly carrying my brother Sean, a t-12 paraplegic, uphill through jagged talus and clawing bushes. It is dark, I am sweating profusely and the rescue coil of rope that supports Sean’s legs and his combined weight of 140lbs cuts into the back of my neck and forces me to take micro rests every few minutes. We had just failed on the northwest face of Half Dome, having gained about 700-feet of exposure. Sean and I were climbing with a 23-year old wall rat from Luxemburg named Ben Lepesant and he, like Sean and I, were more than uncertain of the outcome of our adaptive adventure.

[Above: Timmy and Sean O’Neill in front of their objective, the Regular Northwest Face of Half Dome. Yosemite National Park, California.]

Mark Wellman was the first paraplegic to climb the 2,000-foot face of Half Dome over 20 years ago via a 13-day ascent of Tissack. We were trying to grind our way up the Regular Route, a series of shallow dihedrals, ledges and traverses. The route is easy and fast climbing for the leader but arduous and brutally exacting for Sean’s thousands of pull ups. Since his legs don’t move, he must pull his body over the coarse granite and through the narrow slots. The line finally gets steep at about pitch 17, also the site of Big Sandy Ledge a bivouac for four and the spot we were trying to reach on our first day. As we sat on the sloping ledge that marks the top of pitch 6, we looked up at the coming low angle terrain and the several pitches that go straight across to reach the chimneys and made the painfully wise choice to descend. It is said that the better part of valor is discretion and we chose the frustration and humility of retreat instead of the abuse and toil of the 11-pitches ahead. 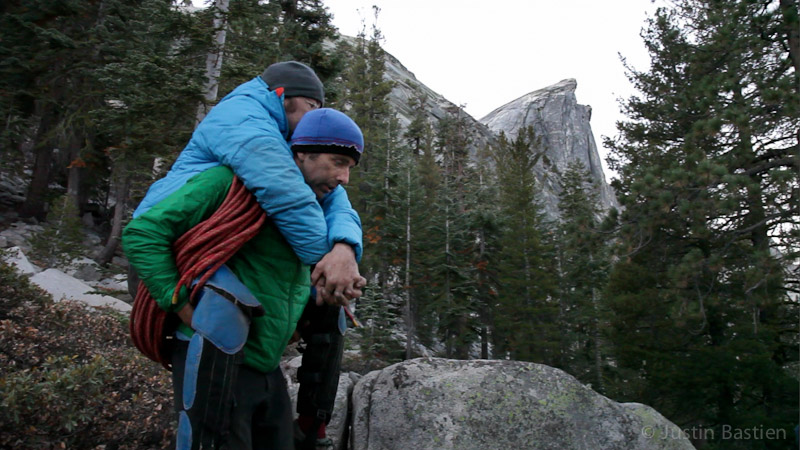 [Timmy O’Neill carries his brother Sean to the base of Half Dome.] 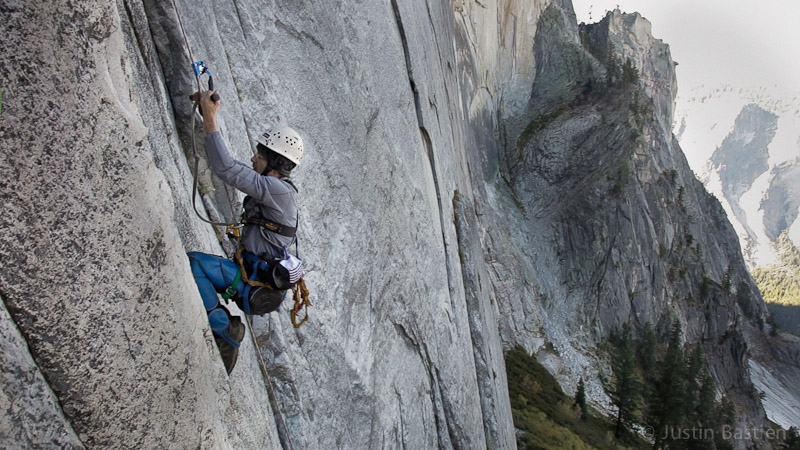 [Sean O’Neill pulls his way up the first pitch of the Regular Northwest Face with 2,000 feet to go.] 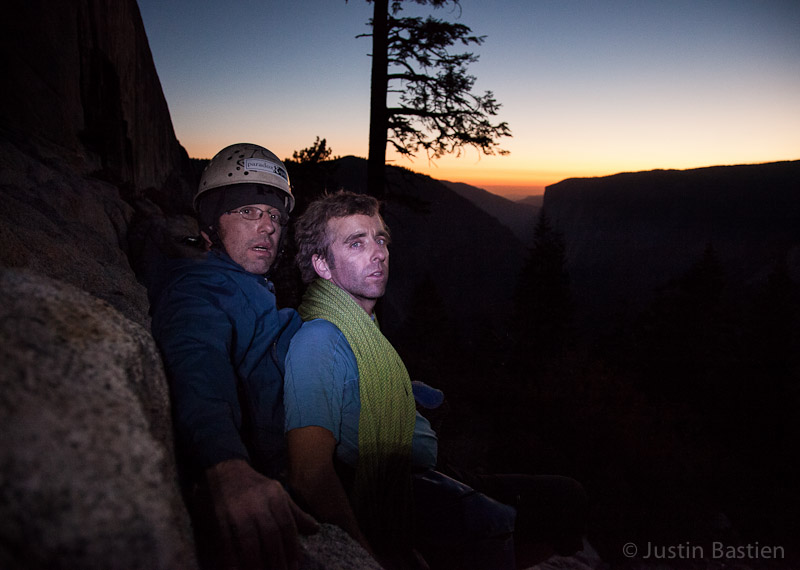 [Sean and Timmy returning to base camp.]

Sometimes you don’t recognize your proximity to disaster until after its shadow of doom has passed. On the night ascent back to the base of the sub-dome I was resting and panting on a flat stone perch with Sean smiling and considering his/our place in the universe. I looked down and noticed that the fronts of Sean’s shoes were dangerously worn. He had been scraping his feet up the wall and was on the verge of exposing his toes until they were ruined. This was the stress relief valve that allowed us to more easily accept our defeat and consider our return to Half Dome in 2013 for a wall-style ascent of the Direct Northwest Face. We will be better prepared in every way.

To climb these walls is to experience the life of an extra-terrestrial, as you no longer exist on the horizontal earth of dirt and vegetation but on the vertical world of air and sky set against cold lifeless stone. We brought a compromised person into an already dangerous scenario to enable a new definition of “normal” and to accept the challenges of adaptation, overcoming adversity and celebrating the futile wisdom of elective suffering. 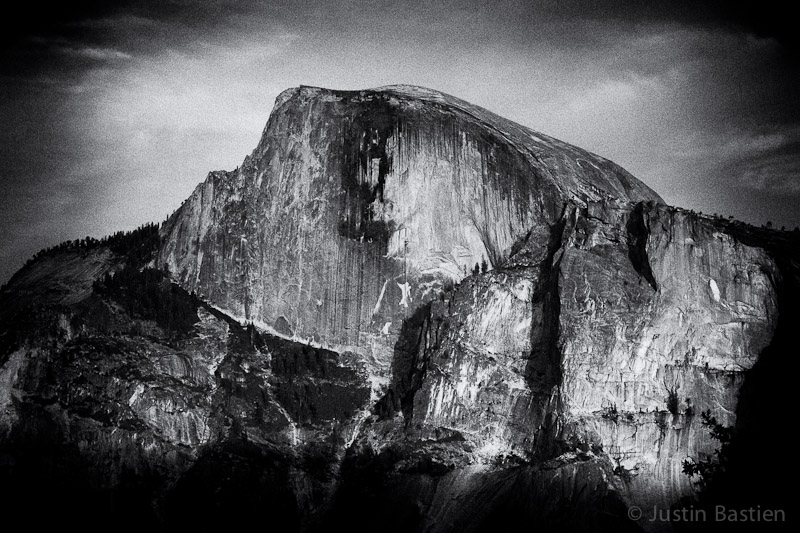 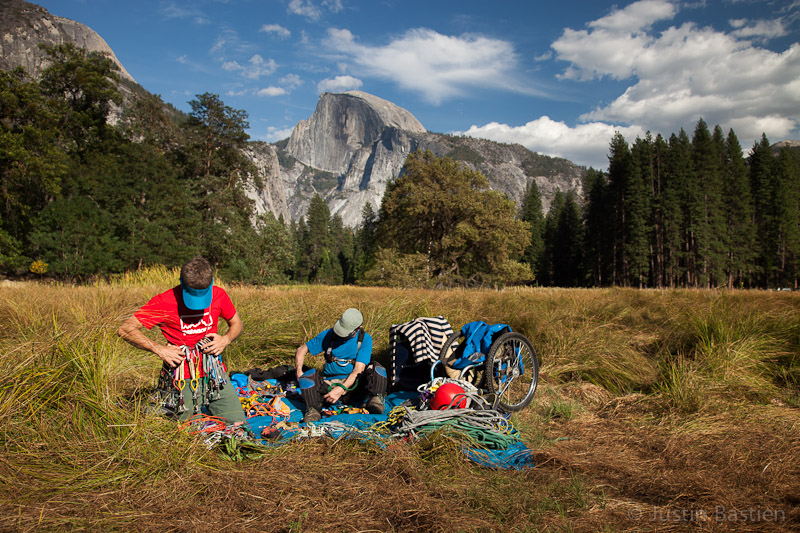 [Timmy and Sean racking up.] 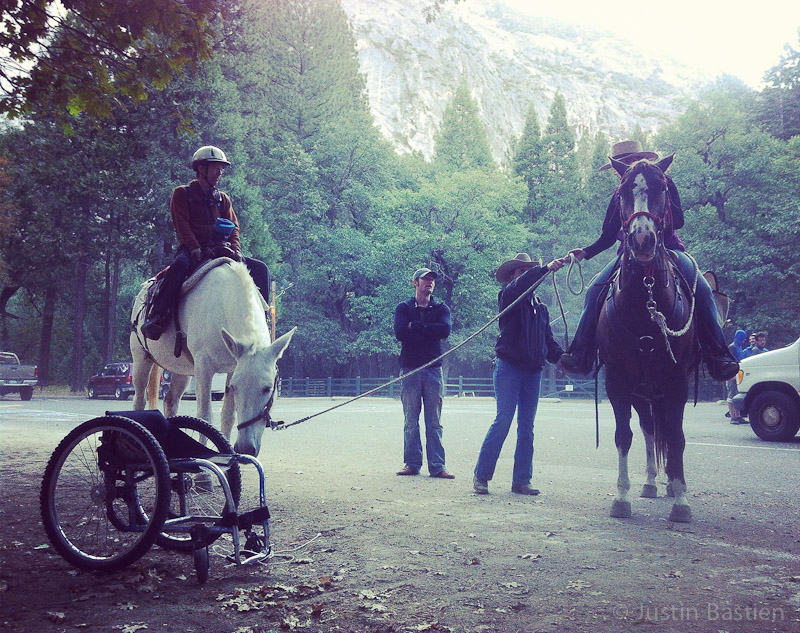 [Sean O’Neill leaves the security of his wheelchair behind as he starts the 8.2 mile ride to Half Dome.] 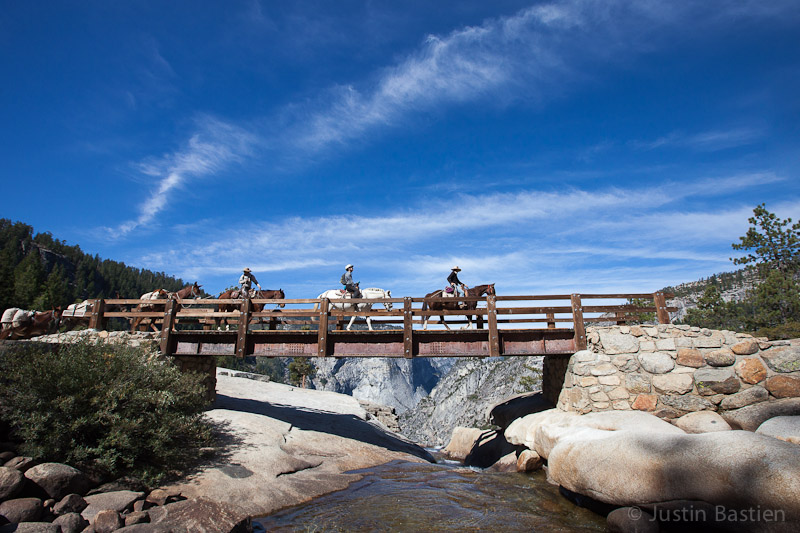 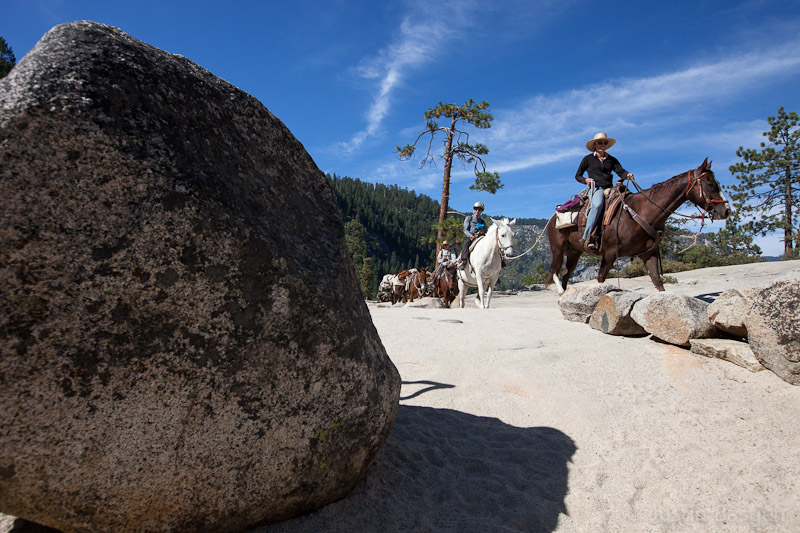 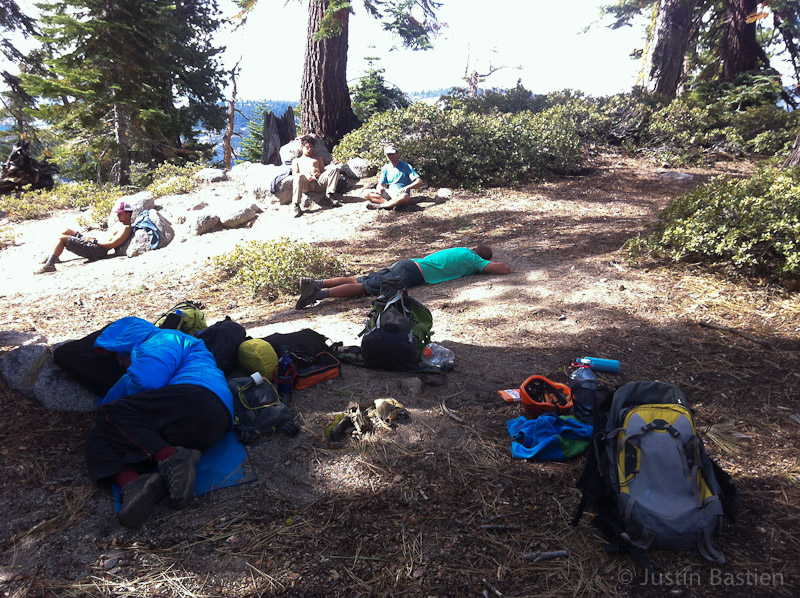 [The six-man support team and 450 lbs. of gear arrive at Half Dome. Sean takes a rest in the foreground after the long ride.] 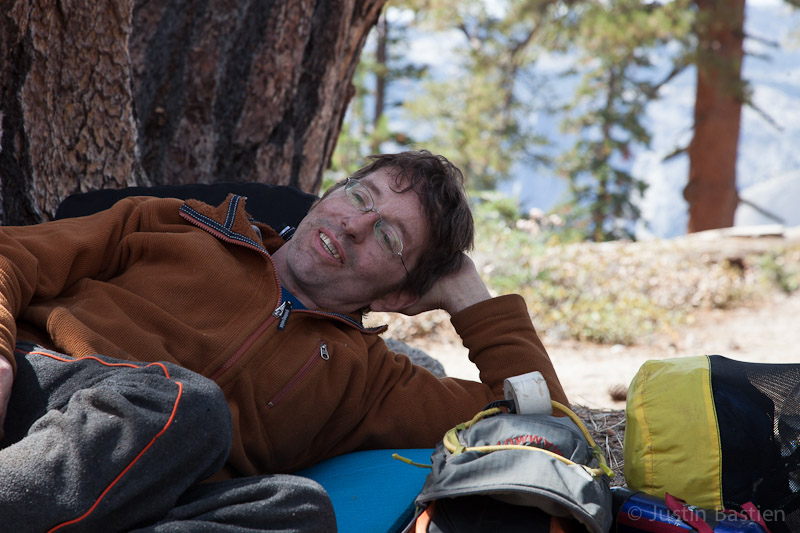 [Even after a long ride and over 2,000 feet of climbing waiting for him, Sean still has a smile on his face.] 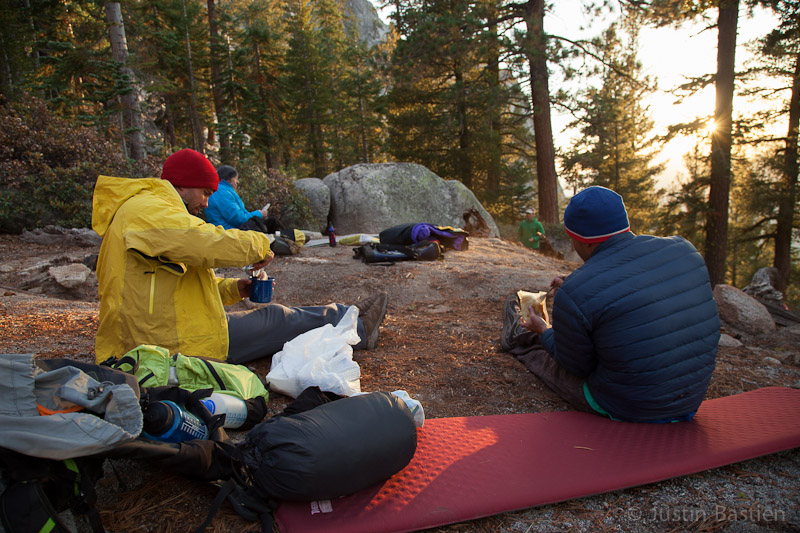 [Sean O’Neill, Grant Nyquist and John Phaneuf dig into some food at base camp before a big day on Half Dome.] 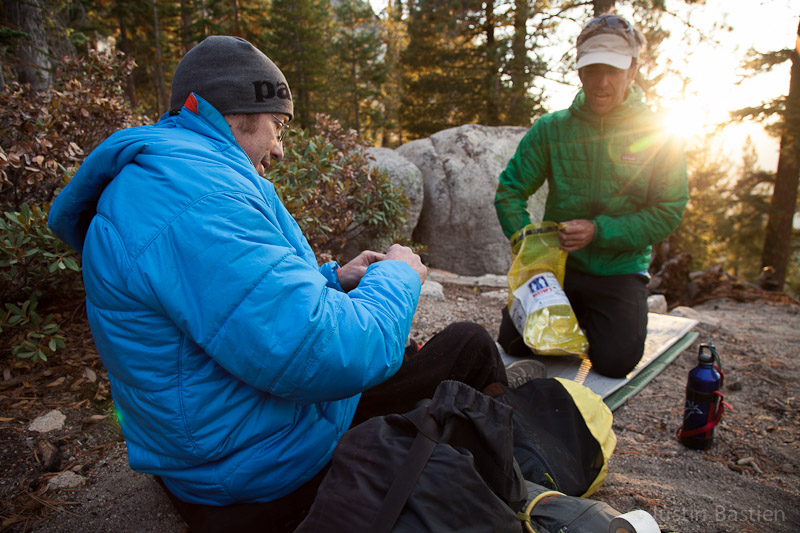 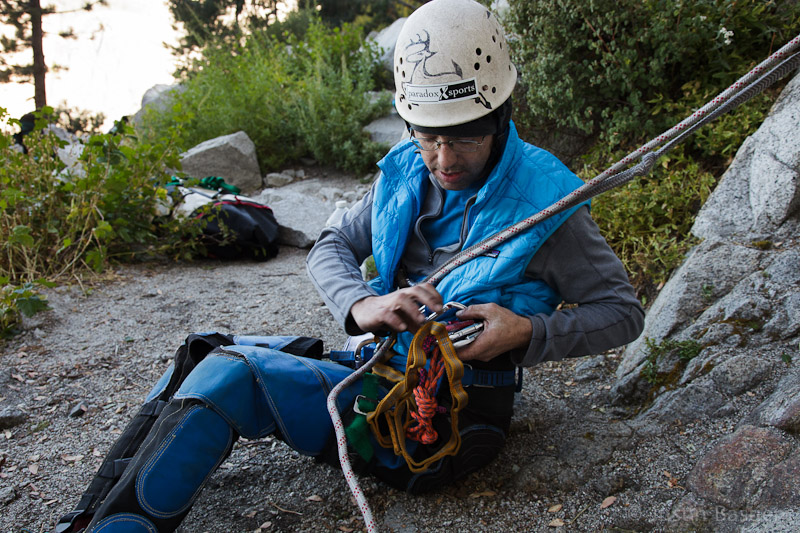 [Sean connects his pull bar to the rope before taking off on the first pitch.] 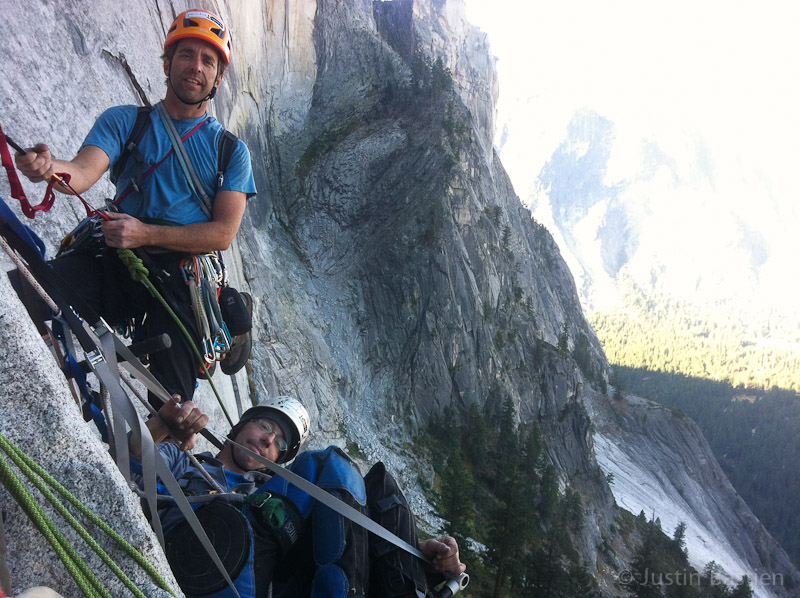 [Timmy and Sean O’Neill at the belay on the first pitch.]

Timmy and Sean, along with musician Todd Hannigan and photographer Justin Bastien, will give a very special presentation tomorrow night (10/4) at Patagonia Ventura (Great Pacific Iron Works). They’ll share some video and more photos from this trip and answer your questions. Please join us if you’re in the area.

Update: Timmy and Sean will also give a presentation at Patagonia New York SoHo on October 25, 2012. Details to come on Facebook.

Timmy O’Neill is a Patagonia climbing ambassador and the co-founder of Paradox Sports, a nonprofit group dedicated to providing inspiration, opportunities and adaptive equipment to the disabled community. He’s set speed climbing records in Yosemite; established new routes in Patagonia, Venezuela and Greenland; and worked as an ophthalmic tech, endeavoring to cure blindness in Africa.

See all stories from Timmy O’Neill