We came armed with double boilers, frying pans and casserole pots. Banging on cookware in noisy opposition to the proposed construction of five mega-dams in Chile’s wild Aysén region, about 500 employees from Patagonia’s worldwide operations joined the wave of worldwide protests against the proposed industrialization of a wild and irreplaceable landscape. Many of our employees were in Ventura for our bi-annual sales meeting: Nacho from our store in Santiago, Chile; Taka from Patagonia Japan; Raul from Patagonia Buenos Aires. Company officials organized the impromptu gathering because of Patagonia’s long abiding connection to the area that is its namesake.

[May 19, 2011, Patagonia Headquarters, Ventura, California. In Chile and other Spanish-speaking countries they call it a cacerolazo – a stew-pot protest. Watch the video version after the jump. Photo: Tim Davis]

[Update 5/26/11: Here’s a short video of our cacerolazo. Video: Patagoniavideo]

Construction of the five-dam hydroelectric scheme known as HidroAysen, moved one step closer to concrete earth-altering reality on Friday, May 9, when Chile’s Aysén Environmental Review Commission gave its blessing to the $7.5 billion dams project driven by Enel, an Italian energy company and its Chilean partner, Colbún. Critics charge that the approval process has been marred by a thoroughly flawed environmental impact assessment, and serious conflicts of interest on the part of commission members.

The dams project is certain to destroy the character of one of Chile’s wildest regions – the region that inspired our company’s name and our ongoing efforts to do what we can to use business to protect and preserve the natural world. This part of southern Chile is considered one of the world’s last, great wilderness areas. It has been dubbed an “eco-gem” for its rare fauna, ice-sculptured fjords and almost total absence of industrial development. 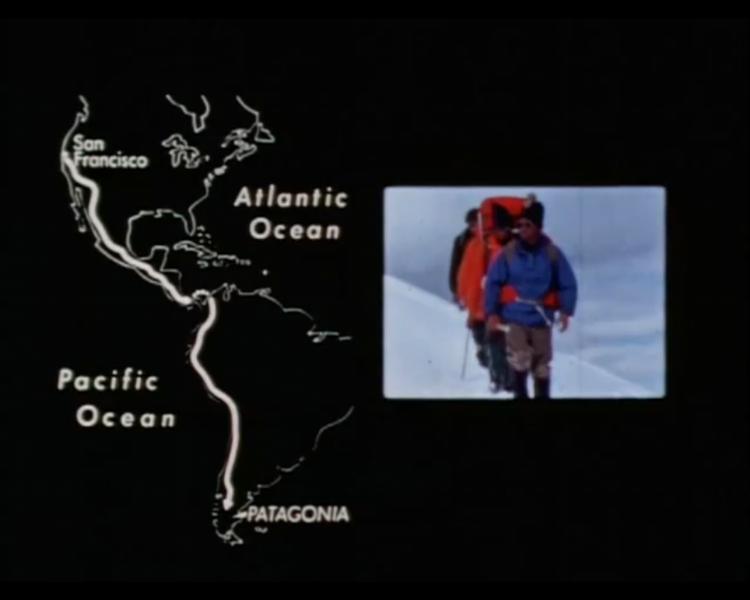 [In the summer of 1968, Patagonia’s founder, Yvon Chouinard, and his friends Doug Tompkins and Dick Dorworth, decided to climb the rarely attempted Cerro Fitz Roy in Patagonia, but first they had to drive from California to southern Argentina in a sketchy van. This epic trip inspired the name of our company and was documented in the film Mountain of Storms. Image: Lito Tejada-Flores] 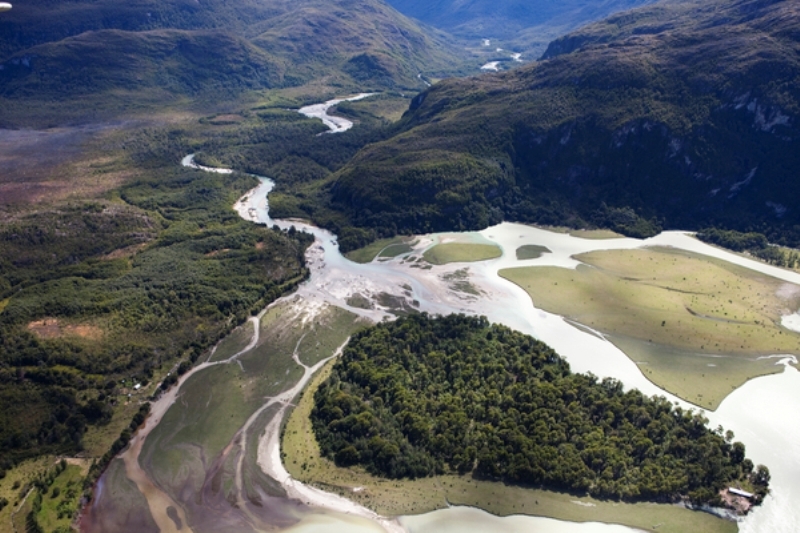 [Aysen, Chile. February 15th 2010. Baker River estuary as seen from a flight above the areas that will be affected by the HidroAysen project. Photo: Daniel Beltra]

“This is like building Hoover Dam at the entrance to Yosemite Valley,” said Rick Ridgeway, Patagonia’s vice president of environmental affairs, who knows the region well, recently spending time there with the making of the movie, 180° South. “We made similar mistakes here in the U.S. damming wild rivers all over our own country. We’re hoping others can learn from those mistakes.” 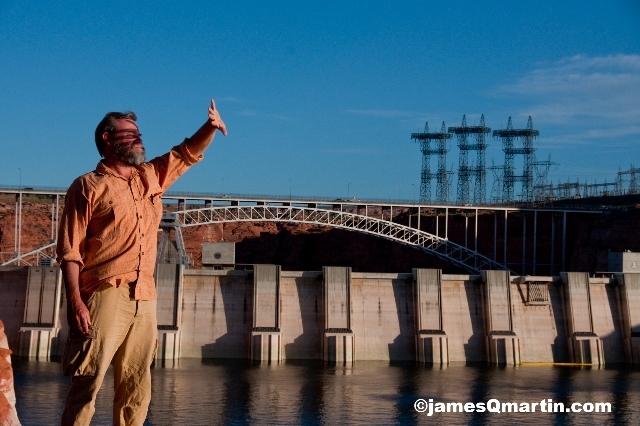 Chile’s economy is growing rapidly, and HidroAysen supporters argue the need for new sources of energy. But less destructive energy sources are abundant (solar, geothermal, tidal), and the Chilean government may not fully appreciate the significant tourism revenue opportunities that could be gained by safeguarding the natural grandeur of the Aysén. Chileans obviously understand it. National polls show a whopping 74% oppose construction of the dams on the Baker and Pascua rivers, and the 1,200 miles of transmission lines needed to carry the electricity to mining operations in the north.

The transmission lines would be held by towers more than 200 feet high. Following a winding corridor almost 400-feet wide, a thousand miles of forest would have to be clear-cut and the rest of the corridor’s path similarly cleared. The corridor would intersect 64 communities and 14 protected areas. It would divide endangered forests and some of Chile’s most spectacular national parks. It would also open up rivers north of Patagonia to more dam building. Environmental review of this portion of the project will take place in December. 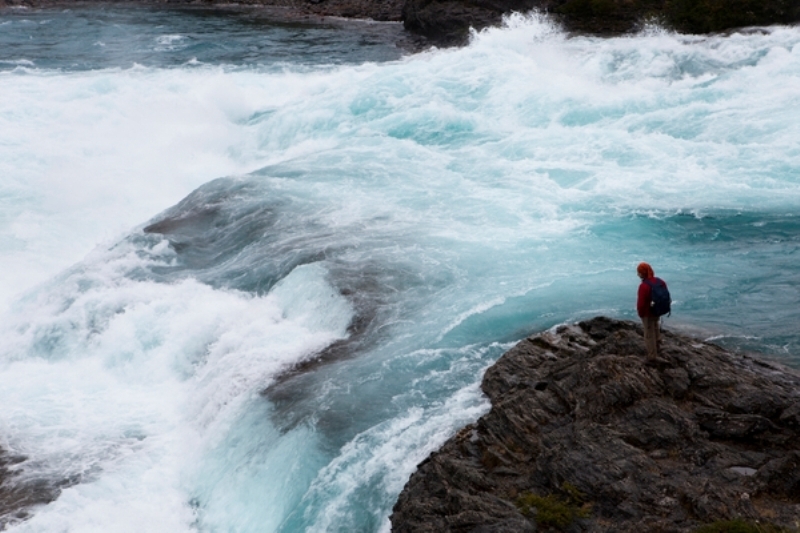 [Aysen, Chile. February 17th 2010. The confluence of rivers Baker and Nef where one of the big dams for HidroAysen is proposed. Photo: Daniel Beltra]

Our peaceful cacerolazo, as the banging in protest of stew pots (cacerolas) is known in Spanish, was just one of many demonstrations taking place in opposition to this environmental disaster. An estimated 30,000-40,000 people first turned out in Santiago, Chile, last week against the damming of their rivers.

As a clothing brand that depends on energy, water and other resources to produce our products, we are not unsympathetic to the resource needs of Chile. But as a manufacturer that is taking a hard look at its own methods of production, we know there are ways of mitigating environmental harm. Many Chileans appear to understand the same thing and we encourage their government to heed their wishes.

“This is not about a North American corporation trying to tell Chile what to do,” said Ridgeway. “It’s about asking Chile’s democratically elected government to listen to the majority of its own people when they say there has to be a better way.” 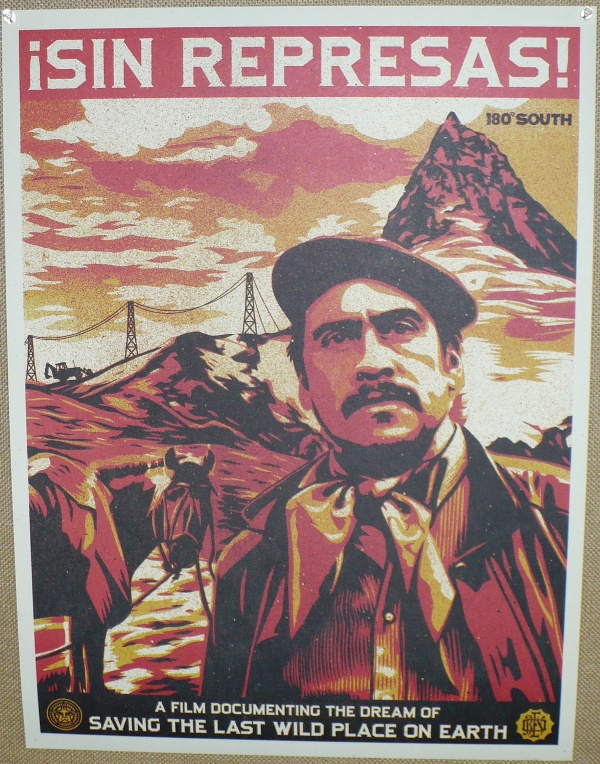 There will be massive demonstrations today and Saturday all over Chile and in cities around the world. Our friends at International Rivers have organized a way for you and your friends to take action against the dams (Updated 7/5/11).

Take Action! Send a letter to the Chilean Embassy to support the Chilean demand for democracy and truly sustainable development.

Jim Little is a word-herder in Patagonia’s marketing department and holds the unofficial record for environmental internships.

See all stories from Jim Little