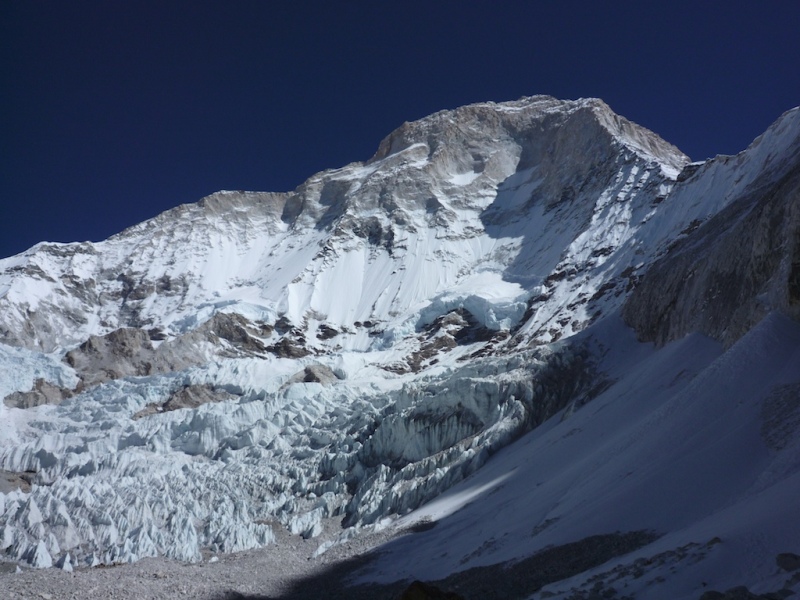 Just as he predicted, Steve House and Cory Richards were not able to summit Makalu via the normal route. The same snow storm that collapsed the kitchen in base camp has halted their progress at approximately 20,000 feet.

This is the second time Steve's been thwarted by weather on Makalu. If you're wondering whether or not he'll be back, consider what he wrote at the beginning of this trip: "Visiting the same peak twice makes it a project. Three times is an obsession." Hopefully Steve will call again before heading home with his final thoughts on Makalu.

["The west face of Makalu awaits a direct route up the face and it awaits an alpine style ascent." Photo: Steve House]

Reinhold Messner called Steve House “the best high-altitude climber in the world today.” But for Steve, climbing is about process, not achievement. He says, “The moment your mind wanders from the climbing at hand will be the moment you fall.” Steve has earned Messner’s praise by leading the charge to climb bigger routes, from the Himalaya’s to the Canadian Rockies, faster and with less equipment than anyone before. He is the author of two books: Beyond the Mountain and Training for the New Alpinism: A Manual for the Climber as Athlete (cowritten with Scott Johnston). In 2012, Steve and his wife Eva cofounded Alpine Mentors a non-profit organization to mentor young climbers to safely become better alpinists.

See all stories from Steve House