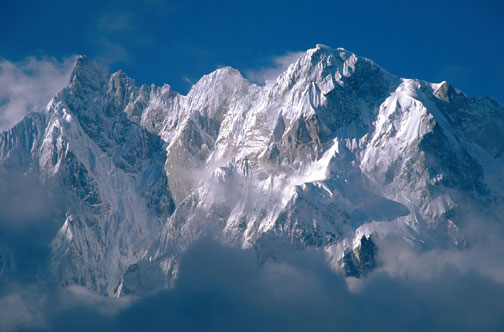 Steve House called again last night from the Charakusa Valley in Pakistan. As you know, he, Vince Anderson and Marko Prezelj have been acclimatizing for first ascents of the west faces of both K6 and K7. It was mostly high-fives and happy times until this report came in. Mother Nature brought some intense weather to the Karakoram and put a damper on the team’s attempt at another first ascent during acclimatization.

They did however get some visitors while the weather was bad. The separate teams of Kelly Cordes and Scott DeCapio from Colorado, and Maxime Turgeon and LP Menard from Quebec, stopped by basecamp to say hello. In an interesting twist, we find out that all three teams share objectives to one degree or another. So now the race is on to see who will snag the first ascents.

Stay tuned for another update from Steve tomorrow. For more details, check out the recent post on Alpinist’s newswire.

Reinhold Messner called Steve House “the best high-altitude climber in the world today.” But for Steve, climbing is about process, not achievement. He says, “The moment your mind wanders from the climbing at hand will be the moment you fall.” Steve has earned Messner’s praise by leading the charge to climb bigger routes, from the Himalaya’s to the Canadian Rockies, faster and with less equipment than anyone before. He is the author of two books: Beyond the Mountain and Training for the New Alpinism: A Manual for the Climber as Athlete (cowritten with Scott Johnston). In 2012, Steve and his wife Eva cofounded Alpine Mentors a non-profit organization to mentor young climbers to safely become better alpinists.

See all stories from Steve House