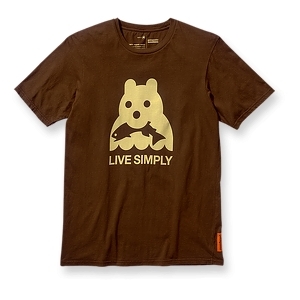 The self-professed ‘Great Irritant’, Doug Peacock, stopped by the Patagonia campus today.  I first learned of Doug and some of the other personalities upon which Edward Abbey’s seminal book, The Monkeywrench Gang, was based during my ‘angry-environmentalist’ years in high school.  Abbey’s descriptions of their antics and lifestyle struck a chord with me. Suffice it to say, getting the chance hear him speak was a real treat.

Doug was kind enough to share some of his archival footage of the Grizzly bear (AKA “the Grizz”) filmed in and around the Rocky Mountains during the 70’s.  He
also read some journal passages from those times, as well as some
excerpts from his books.  Most importantly though, Doug spoke passionately about his relationship with the Grizzly bears and the tragic consequences that the de-listing of the Yellowstone population from the Endangered Species List will cause.  While the supporters of de-listing point to population counts, the reality is that this is a genetically isolated population that is succeptible to inbreeding, threatened food sources and soon, potentially, hunting!

It was bittersweet to see Doug’s footage of these bears from 30 years ago.  A joy to see them at ease in the wilderness and a tragedy to think about what their future holds.